Ashley Becomes Mentor of the Year Despite Tragic Loss 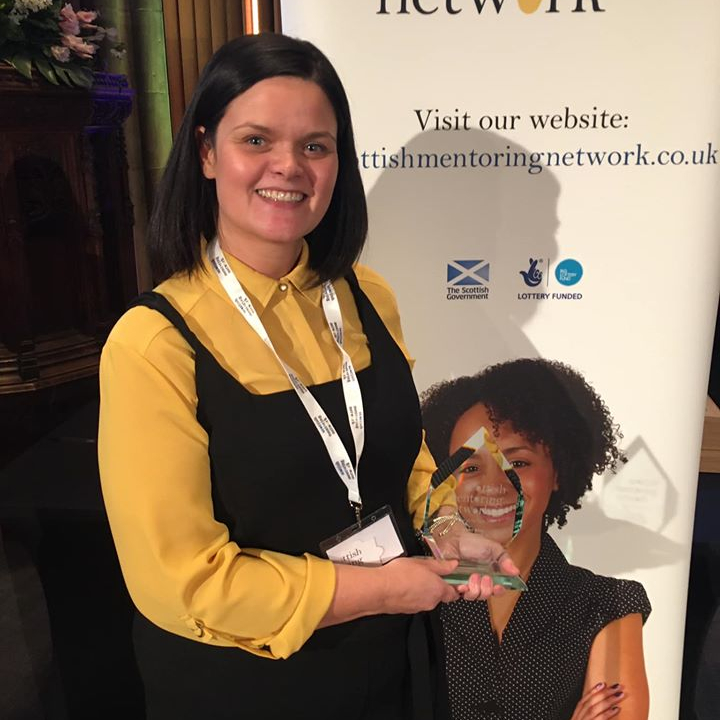 Ashley King, from Kirkcaldy YMCA, was awarded Mentor of the Year at the Scottish Mentoring Network Annual Meeting last November. Despite the tragic death of her son last year, she has continued to volunteer.

“I became a mentor two years ago. I had set myself some challenges for the new year and volunteering was one of them. I had no idea where I should volunteer but when I heard about the mentoring opportunity at YMCA Kirkcaldy, I decided to go for it.

I had a great relationship with my first mentee but after my son passed away, I felt I had to stop volunteering for a few months.

My new mentee’s family life is chaotic. She’s quiet and withdrawn. It’s often challenging to engage with her because she isn’t very responsive. Sometimes, I turn up and nobody’s home or she doesn’t answer phone calls or messages.

But I keep engaging with her because I know that eventually I’ll get a response. I know she has no one else to turn to, so I have to keep showing up.

Recently, I’ve had a bit of a breakthrough with her and that has meant a lot to me.

Last November, Linda, the Mentoring Programme Manager, phoned me to let me know that she had put me down for an award and that I had won. At first, I thought I had been just been selected out of our group of mentors or within the YMCA. I hadn’t realised this was a national award! I was shocked.

Getting the Mentor of the Year Award was overwhelming because it was on the same week as my son’s death anniversary. But it was also a great encouragement because, in many ways, I felt like I hadn’t accomplished much last year. I’d started back as a student nurse in September but that hasn’t really worked out. So being recognised for the work I do as I mentor means a lot.

Mentoring has given me the chance to be a role model, not just to the young person I mentor but also to my other son. I’ve been encouraging him to go back to work but I felt I could not ask him to do that if I wasn’t getting out there myself.

Committing to being a mentor has been tough at times. I struggle with anxiety and it’s been worse since last year but mentoring has given some structure and purpose to my week. I would encourage anyone to get involved.